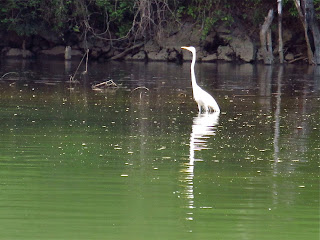 On the January Mountaineer's tour of Chiapas, one of the last things we did was take a boat down the Sumidero Canyon. This was my third trip, and was by far the most interesting in terms of available wildlife.

One section of the canyon rises out of the water in a gentle slope. The rock slab is the favorite sunning place for hundreds of black turkey vultures. At certain muddy spots, crocodiles bask in the sun as well. Our boat pilot managed to bring the boat close enough to a croc that it moved away into the grass.


Water birds were in abundance, fishing and "grazing" in shallow places. The canyon is bound on both sides by steep rock walls of limestone, in places rising to 1000 meters above the level of the water, more than 3000 feet. But for a few kilometers prior to the deepest sections of the canyon, there are a few shallow spots. We saw herons, ibis, king fishers and others I didn't recognize.

There is also a family of spider monkeys living in a certain tree'd area that I had seen on one other previous trip. It was a cool morning so they were actively foraging in the branches overhanging the river, a perfect place for us to see and photograph them.

Earlier, at Yaxchilan, we were bombarded by the roaring of some howler monkeys. They were so high up in the trees they appeared as black blobs amongst the dark green leaves. But I had seen a family of them on a previous visit to Palenque. For such loud animals, they are awfully small. 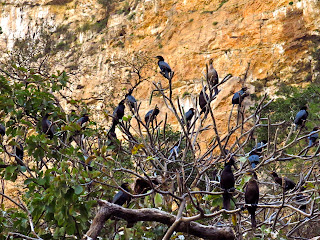 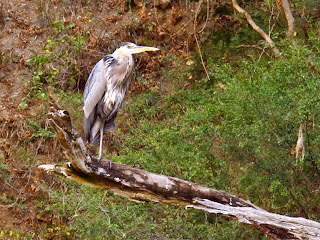 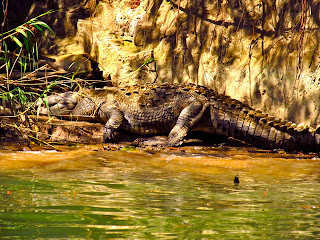 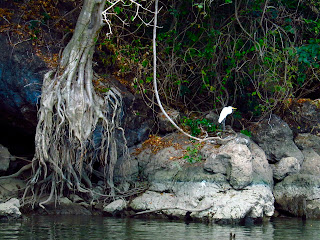 Posted by Sherry Hardage at 5:13 AM