I have mixed feelings about tours and tour guides on occasion, in spite of being one myself. Commercial tours tend to be geared toward the interests of many and therefore don't delve into aspects of a place and culture like I would prefer. All inclusive tours feed you too much, spend too much time visiting stores (where often the guide gets a kick-back), and rush you through the sites you want to see in order to hustle you on to the next store. So it is a pleasure when you go on a tour and the guide actually makes an effort to find out what you want to see and then arranges for local experts to meet you there.

I am a docent at New Mexico's Coronado State Historical Monument. We give tours of our famous reconstructed painted kiva to visitors. A group of us, including a researcher and one of the park rangers, went on a fast 4 day trip to Chihuahua, and engaged the services of Luis Buenavidez, a guide who operates out of the Pink Store in Palomas, Chihuahua - right across the border from Columbus, NM.

We met Luis on Friday and drove 3 hours south to Nuevo Casas Grandes, where we would be spending 2 nights in a very Mexican hotel. He took us to the ruins of an ancient pueblo, Paquimé. It is the southernmost city of the southwestern culture of the Pueblo people, the same people who built Chaco Canyon and Mesa Verde. However, the Paquimé were influenced as much by people to the south as by those from Chaco Canyon. They had a ball court and a platform in the shape of a giant "+" with circles at each end, not unlike the Mayan cross found all over Chiapas. They also raised and sacrificed birds, specifically turkeys and the red scarlet Mackaw, also common in Chiapas. One of their more notable technological achievements was a water system that not only irrigated crops but delivered water directly to their homes.

(More on the Mayan Ball Game) 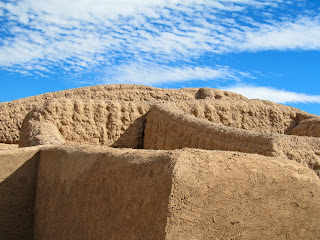 The museum is one of the better museums I've seen in Mexico. The displays are well done and all signage is in both Spanish and English. Their collection of Paquimé pottery is exquisite. 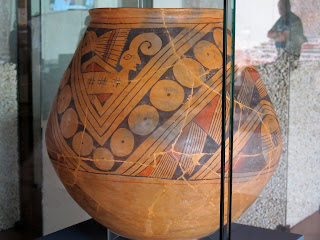 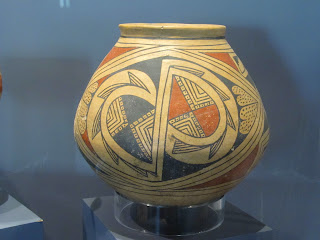 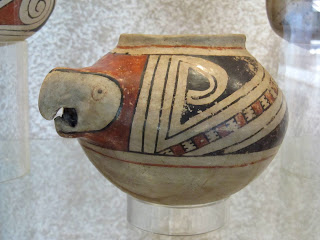 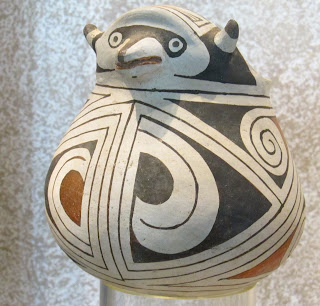 The following day, Luis took us to the village of Mata Ortiz. As docents at a historic site, we were interested in the ancient culture of the Paquimé and also the current culture of making beautiful pottery. In the 1960s, a man named Juan Quezada dug up old pots and was impressed with the artistry. He decided to learn how to make them. Over a decade of self-teaching about where to find the clays, shape the pots, make the paints, decorate, and then fire them, he finally came into his own as a potter. During the next few decades, he taught the people in his tiny village to make pots too. Now, 2 generations later, his tradition has evolved into some amazing works using the traditional techniques he developed, with a global sense of style. Mata Ortiz potters are famous around the world.

We were introduced to Sr. Quezada and then he personally guided us on a trek into the desert where he and his family still mine for various colors of clay. In rocky, prickly terrain, we watched him dig a shovel full of brown clay. He explained that the clay is put into buckets, then filled with water. Over a day or so, the rocks in the clay sink to the bottom and the organic material floats to the top. The clay can be easily scooped out and then dried somewhat to become the right consistency for making pots. All the work in his studio (shown below) was fashioned by hand. The paints are traditional paints created onsite and applied with human-hair brushes. 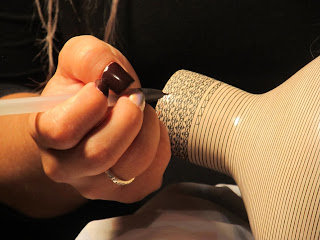 Should you be interested in taking a tour with Luis, you can contact him through the Pink Store in Palomas, Chihuahua, or email him directly:  luisbenavidez75@hotmail.com

Or about the Mata Ortiz pottery:   http://mataortiz.com/
Posted by Sherry Hardage at 11:35 AM No comments: