Return to the Familiar

All over Mexico, you'll see restaurants with the phrase "Restaurante Familiar" under the name. It means they welcome families. Now in the US I would avoid a "family restaurant" like the plague - fearing my meal would be one long scream-fest. But children in Mexico are normally very well behaved and there's only crying when one is hurt or desperately needs a diaper change.

My city familiar is San Cristobal de Las Casas, in Chiapas. I'm there now. This is my sixth time to live here for some part of the year. In 2012 I lived here attempting to rehydrate my dessicated high school Spanish and have rented apartments in several locations since then.

Now I am staying in Casa Blues. It was a large two-story home to an extended family for at least a century and has been owned by the smae family for about 30 years. The two grown boys live here with their wives and children. There are two nice casita's in their own little garden on the other side of the wall from the family house. My friend John lived here for about three years before moving back to the west coast. I stayed in his casita once when he was gone, and then rented it for myself this year.

Casa Blues is just a few doors down from Margarita's house, where I took care of her animals when she was gone. It's two blocks from the house where I lived for 6 months, and barely four blocks from el Centro where I rented two different apartments. At night I can hear the amplified jazz musicians singing in the bar down the street. The tropical birds and neighbor's rooster wake me up in the morning.

I know the banana man in the market where I buy the giant red bananas for frying and the tiny sweet yellow ones for eating.

I wander up the Cola del Diablo, the Tail of the Devil, a narrow street that makes a sharp turn to the left. Some cars go too fast and once in a while a pedestrian gets run over.  But the best little bakery is just on the other side of that turn and I know to walk on the left side of the street, the sidewalk is higher. When cars go too fast they tend to overshoot the turn and hit the right curb.

Traveling is always a little scary, and it's the unknown things, like the Cola del Diablo,  that actually endanger us. When one becomes familiar with a place fears disappear. This city is my Mexican home. I know people. I'm invited out to lunch, concerts and parties. Though I'm only here for short periods of time, I feel safe. I am in la ciudad familiar, in the bosom of chosen family. 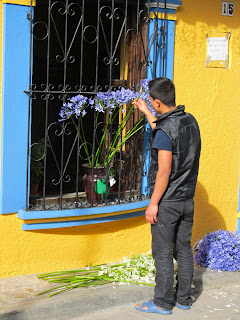 Posted by Sherry Hardage at 6:56 PM No comments:

I am again in San Miguel de Allende. This makes the fourth time I've visited this beautiful colonial city. Friends of mine have gone back to the states and they are letting me stay in their small apartment just off Ancha de San Antonio, one of the larger streets in the city.

At the end of this street is the Zócalo, the Jardin, the Centro. It goes by all three names. A large tree'd park with a pink stone, elaborately carved, parochial church on the south side; the police station, on the north, with banks and restaurants flanking the other two sides.

It is where the city goes to hang out, people watch, walk dogs, sell snowcones and plastic toys. It is a city that, starting just shortly after WWII, has been inundated and more or less taken over by Gringos. So much so that when I speak Spanish to someone, they automatically look at my pale freckled face and begin to speak English. Sigh. 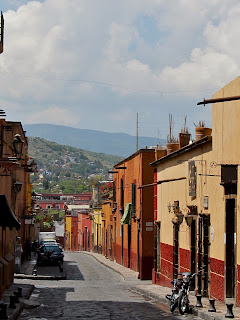 It is a beautiful place, but the plethora of Gringos is why I wouldn't want to live here. Don't get me wrong, the Canadians and Americans have brought lots of money to this part of Mexico causing it to be more prosperous than many other places. They have also started over 200 non-profit organizations that perform the services the government cannot (or won't) do, like provide wells for small towns, mid-wife training for young women in the villages, dental care and library books for children, and nutrition training so people don't give their babies Coca Cola instead of water to drink.

I wouldn't live here for the one selfish reason that I speak Spanish more often and better elsewhere in Mexico where there are not so many of my countrymen.

It's not a cheap place to live, but small apartments can be rented for around $350 a month. There are plenty of low-end hotels for $20 a night, and plenty of high-end ones that will set you back more than a month's rent for one night. Homes range from $89K US dollars to over 4 million. Deep inside the city, a simple looking wall with large wooden doors guarding the driveway can be hiding a 2 million dollar elaborately outfitted home. 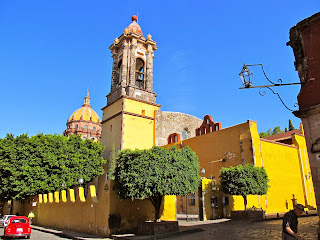 San Miguel has been a tourist draw for years, but now more than ever. Condé Nast named it the destination of the year and since then, the number of tourists has increased and Mexicans, in search of work, have poured into the city.

Now in the spring, the Jacarandas have finished their purple flower rain, and the bougainvilleas are in full force, ranging from deep red to the palest lavender. They overflow the walls of gardens to sprinkle their flowers on the walkways like little girls at a wedding.

During the last week, every afternoon, the clouds built up and it has rained. The rainy season is early this year. Soon the storms will be fierce by late afternoon and evening. And every morning, the streets are fresh with the scent of flowers and pan dulces baking in the panaderias. 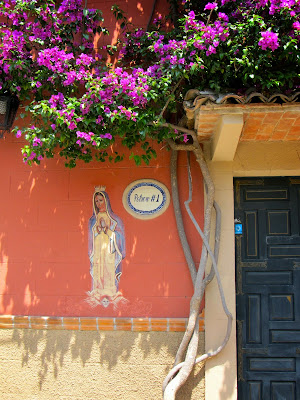 Posted by Sherry Hardage at 1:57 PM No comments: