On a recent trip to the Texas Hill Country I was impressed at the number of invasive species. Maybe that was because there is so much natural landscape, the people don't stand out as much.

I had done some reading on the proliferation of wild hogs and European boars throughout Texas. They've been feral for several hundred years and have reverted to an older body-style; quite hairy, short, heavy, and with bigger tusks.  There are 2.7 million of them concentrated in south Texas. Some wildlife managers refer to them as four-legged fire ants. They cause millions of dollars in damage to property every year.

I took my mother on this trip to Texas to visit relatives. She likes to walk a mile or more every day, so one morning we drove into Bandera and parked at the very interesting historical museum where we walked the streets for a while.

A portly woman whose house was on the edge of a ravine was more than happy to strike up a conversation about the fifty or so Axis deer that had just wandered through her yard. The family owns 17 acres of wooded land behind the house, where they hunt with bows and arrows. Bow hunting is safer, you don't have to worry about a bullet straying off and hitting someone in town. They have a pig trap and get a wild pig about twice a month. I asked what they do with it. She looked at me as if I was an alien from Mars. "We kill it and eat it," she said quite matter-of-factly. "And we have dogs." As if that answered the question I hadn't asked, about how a single family eats two pigs a month, plus whatever other animals they manage to kill with a bow and arrow.

The conversation gave me a "hankering" for some wild pig meat. I finally ran across wild boar sausage on the menu at a German Restaurant in Boerne (pronounced Bernie.) Buffalo was also on the menu so I had both. Quite delicious and no more greasy than a regular pork sausage.

Aunt Judy and Uncle Bob have been living in Bandera County since 2000. The Hill Country is their giant backyard. As we drove around, I spotted all kinds of road kill; the usual rabbits and skunks, and one large creature I thought was a bear! It was a wild hog; solid black and hairy with its feet in the air, tossed off the road onto the grass. Bob said it would be unlikely that we would see one since they're nocturnal. They're out tearing up fences, corrals, cattle feeders, and stock ponds at night when the people, dogs and horses are asleep.

On a drive west to Tarpley, Utopia, Vanderpool, and Leaky (pronounced Lakey), the landscape is a bit drier and there were herds of black buck antelope. These wild herds were brought in like the Axis deer for trophy hunters. There are a number of ranches in Texas with self-sustaining herds of African grazers. On the WWR ranch you can hunt for African Trophies. And in fact, as herds have diminished in Africa, several species would be in danger of extinction but for the herds still thriving in Texas.

When you stop to think about it, every continent but Africa is overrun by an invasive species of ape: us. Few species have caused more damage to nature. But it was a pleasure to this particular human to spend two weeks in the Texas Hill Country - where the animals outnumber the people and the natural world is more natural than most places even if many of the animals don't really belong there.

In the hill country of Texas bluebonnets, white poppies, daisies, and several other flower species all bloom around the end of March and into April. This year, 2016, has been an especially great spring for the flowers as the winter was mild with plenty of rain.

My mother's sister lives near Bandera, the Cowboy Capital of the World. It's hard to believe as the only "cowboy" I've seen so far was a dude in shorts, a cowboy hat and painted cowboy boots, probably bought that very day at the Western Warehouse in San Antonio.

We flew into San Antonio on Tuesday and spent a sunny Wednesday traveling all through the hill country stopping often to photograph the rolling limestone hills, red granite cliffs, clear streams, and wildflowers. Because it was a weekday there were no traffic jams at the more scenic spots, though there were certainly a lot of people out doing the same thing.

The Hill Country is an area bounded by San Antonio in the south, Austin in the East, and the Llano red granite uplift in the north and west. West of Kerrville the hills seem like small mountains, the roads narrow and twisty, the views from hilltops spectacular.

Larger towns have common national brand-name hotels, but the smaller towns feature B&B's, cabins, cottages, and furnished apartments available from local internet sites and others like AirBnB and HomeStay. The streams and rivers are fairly shallow but wide, and navigable by flat bottomed canoes that are available to rent. Cypress trees line many of the creeks with spaghetti-piles of convoluted roots.

This year it is green, so green as to seem like a miracle to most of us westerners who've grown accustomed to the decade long drought.

So far it's been a fantastic trip; visiting relatives, seeing friends in Austin, and adding one more checkmark on my bucket - photographing the bluebonnets at high season in Texas. 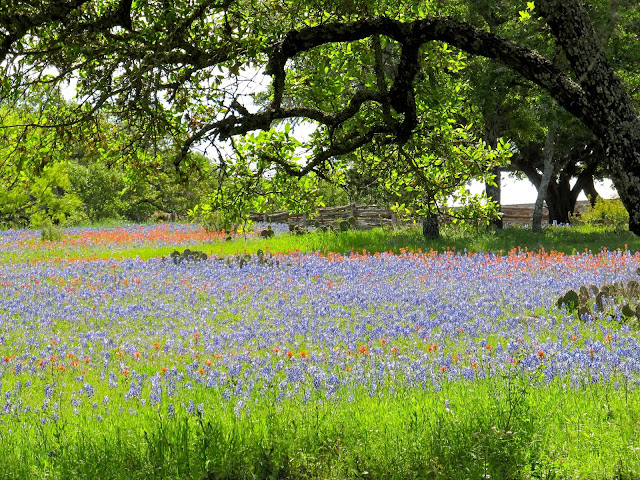