Way out on the northern edge of San Cristobal, Chiapas, along the Periferico Norte (a major highway), lies a tract of forested land where a man named Cisco has built a preserve for orchids and bromeliads. It is called Orquideas Moxviquil. Moxviquil (Moshveekeel) means navel of the world according to the Chamulans (see post: Chamula and Zinacantan ) who once owned the land. They still use the trails all through this section of forest to travel on foot from San Cristobal, over the range, to their village. The network of trails is like a spider's web and it would be very easy to get lost up there, except that you can always head down hill and eventually make it to the Periferico and the city.

The center has several buildings. Some are accommodations for visiting students, a conference building for classes, and several green houses, the most beautiful of which looks like something out of a Tolkien novel. Inside are the lowland orchids, that require hotter temperatures. It has lots of glass for solar gain, a ceiba tree (the sacred tree of life in Mayan mythology), many jungle plants and tons of orchids and bromeliads. At least 20 were in bloom the day we visited. Since these are all wild plants, the blooms are quite small and not at all what one is accustomed to seeing in florist shops around the world. One set of yellow blossoms smelled like cinnamon. 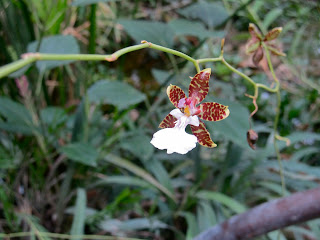 Cisco is very gregarious and knowledgeable, passionate and talkative. He probably would have talked all day about the way this center was created, how he went out into the local logging operations to rescue the rare plants before the trees were dragged off, and how much effort has gone into growing people's awareness. Mostly it is the local Mayans he wants to impress with the importance of saving these species. They are lured constantly to sell off their lands, water and logging rights, and let large corporations come in and purchase (for a pitance really) their valuable commodities. Cisco is on a one-man mission to show them how much better their lives can be if they don't fall for that lifestyle and instead develop their areas in sustainable ways, including eco-tourism. He is originally from New Orleans, and speaks Spanish fluently, plus a lot of Tsotsil. Students from all over the world come to volunteer and study at the center, it is known world wide as one of the best collections of wild orchids, and Cisco knows every plant's common and scientific names and environmental needs. Some students have also collected mushrooms and tree fungus, transplanting the mycilia around the grounds. Quite a few have taken hold. It is an impressive center, and well worth the $30 peso entrance fee. 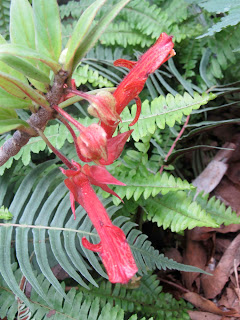 I had gone there with my friend Arnulfo, and my visiting friend Derek. Arnulfo is very concerned about another property on the perifery of San Cristobal, a bio-sphere preserve that belongs to the state, donated by Gertrudis Blom, a famous environmentalist, but has no apparent funding or protection. At this time in history, many people are moving into San Cristobal and they encroach on this property by building houses. Plus they randomly cut firewood without any knowledge or regard for the rare plants that live in the bio-sphere.  While Cisco had many "war" stories about trying unsuccessfully to save tracts of land and didn't think that this one could really be saved, he encouraged Arnulfo to do everything in his power to make it happen. Miracles happen regularly in Mexico, as we all know.

Posted by Sherry Hardage at 9:35 AM