I don't usually write about the same place twice, but I went back to Ha'Omek'Ka for a couple of days to understand and experience a communal life in a bit more depth.

It taught me a few things. It's uncomfortable to think of my own lifestyle in the US as being out of touch with nature and the reality of nature, but it is. I mean, I do all the suggested "help the earth" things like recycle paper, aluminum, and plastics. I don't drive my car as much as I used to. I compost organic stuff from the kitchen rather than run it through the disposal. I hang my laundry up to dry, I don't even own a dryer. I buy as few processed foods as possible, for my health's sake as well as saving the landfills from excess trash.

But my life, our life, the life in an industrialized place, is NOT in tune with nature. It simply is not.

On the commune, toilets are composting. Access to the toilet is up a flight of stairs. The toilet itself is made of concrete, not porcelain, and is designed so that pee is caught in a cup and drained away, poop goes down into a catchment basin along with the TP. When you finish, you dump a couple of large handfuls of sawdust on top and close the lid. It's rather crude, and a bit stinky, but nothing as disgusting as a forest service outhouse.

People sleep in simple rooms. Mine was in the round concrete bottom portion of a two story building. It was not far from the river. When the river floods terribly, the bottom part may fill with water, but little harm comes of that. It would just need to be cleaned out and dried, then it would be ready to sleep in again. Upstairs was a wooden square room where someone else slept. There were three of these structures in a row, with a toilet building between two of them.

Washing was done at the wash house, which sat off to the side of the three buildings. It was a small wooden structure. Inside was a simple shower with a gas powered water heater hanging on the outside. A concrete sink just outside the door had ribs in the bottom. It served as both a clothes washing sink and for brushing teeth.

On Friday, I decided, even though it was cloudy and a bit chilly that I would bathe in the river. They asked that you wear a swim suit because there are a number of people who don't live on the commune who pass by on the trail. I wouldn't have gone skinny dipping in the daytime anyway!

It was cold. Not freezing, but the kind of cold where you gasp a bit when the first foot goes in and it's just best to dip in as quickly as possible to get the shock over with. Places in the river are deep enough to dog paddle around and it was fun. The current wasn't fast and I had no fear of being swept away.

Up at the wash house, I rinsed off in cold spring water that felt relatively warm after the river, and washed my hair. It was refreshing. The only problem was that the humidity was so high I couldn't get dry, and I continued to get colder and colder until I finally decided to put on my nightgown and get into bed. It was a couple of hours before my feet warmed up.

Meals were served in the dining hall. Cooking was done on wood stoves made of concrete and stucco. It was the most efficient wood powered cooking stove I've ever seen, just a small space for the wood topped by a large metal sheet. Wood was fed into the stove through a hole in the front. That plate got hot enough to boil water quickly and fry eggs in a cast iron skillet. There was also a wood fired oven for baking bread. And they had a traditional gas stove with four burners on top. It wasn't used much because the gas comes in tanks that are quite a chore to carry up the trail to the main road. Plus gas is expensive.

I was under the impression that the community raised all its own food, but that's not the case. As a permaculture farm, plants are interspersed. So along with flowers there were salad greens, vegetables,  and tall red stalks of Amaranth. Vegetables grew in the greenhouse in winter and all over the place the rest of the year. We enjoyed honey from five hives, jams from berries, and fruit from trees growing here and there. Banana plants pop up where ever they wish, so there were always some bananas on the table. Eggs are a regular protein, and are supplied by the dozen chickens living in a large pen with plenty of grass for them to forage. The neighbors grow corn, avocados, and chayotes, so there were locally produced foodstuffs to add to the meals.

The whole point of sustainability is to impact the environment as little as possible. The community is wired with electricity which in Chiapas is fairly cheap, there are five hydroelectric dams in the state. They buy tanks of natural gas for hot water and cooking, but conserve it as much as possible. Water is drinkable, coming from a spring up the hill, and is piped to all the wash houses and the kitchen. They make their own dishes and cups from clay mined on the property. And they have a number of accords, agreements that the residents adhere to. We agreed not to bring anything that creates trash onto the property. No potato chips in plastic bags, soda pop in cans, milk in plastic jugs, etc. Rather than recycle, it is simply better not to accept those products in the first place.

Everything, including human poop is composted and used as fertilizer in the gardens. When the natural grasses dry up, the "straw" is raked and bagged, to be used as mulch and additional composting material in the toilets. Most of the land is natural, with wild flowers and grasses. The plots for growing food are moved every couple of years to let the land recuperate.

The community is vegetarian and the meals were very corn-centric since that is the main cereal crop of the region. None of the local corn is from Monsanto, it is grown from harvested seed. Beans and eggs provide the bulk of the protein needs while several different vegetables with each meal ensure plenty of good vitamins. Everyone seemed healthy, energetic and strong.

Spirituality plays a large role in communal life. People are openly affectionate while maintaining a very respectful demeanor. Once a week they hold a temascal, a sweat lodge ceremony. Rocks are heated in a fire and then brought into a bamboo structure covered with blankets. Water dribbled over them creates steam and people sing songs together while they sweat. In fact there is a lot of singing and music going on. Without TV or radio, people play instruments in the evenings, sing songs and on some nights have language lessons in the local Mayan dialect of Tsetzal.

Many people were in transition while I was there, so I did not see the community if full action. I did see the care and compassion people had for one another. I made a pot in the workshop and left it behind in the hopes that it might be used for soup or sold in the store. I helped Arnulfo a tiny bit with harvesting some coffee beans, and since it had rained so hard, there wasn't much farm work to accomplish.

Arnulfo and I walked two kilometers to the local waterfall attraction. We hiked up the hillside along the roaring cascades and had a lovely time talking about living inside, not outside, of nature. On weekends the place is crawling with tourists, but for us, on a Friday morning, it was heaven.

The community was a wonderful place to hang for a while and gratifying
to see how people can survive well in a sustainable way. Their way of life is doable for centuries, as long as people understand all the principles involved and don't get sucked into outside technology that isn't sustainable.

It is a way of life that human beings will need to go back to when this civilization collapses. Do I sound like a horrible pessimist? Perhaps, but historically no civilization has survived massive corruption, overpopulation, or ecological collapse. It's only a matter of time and it pleases me to see groups of people working to revive nature-compatible ways to continue our human presence in the world. 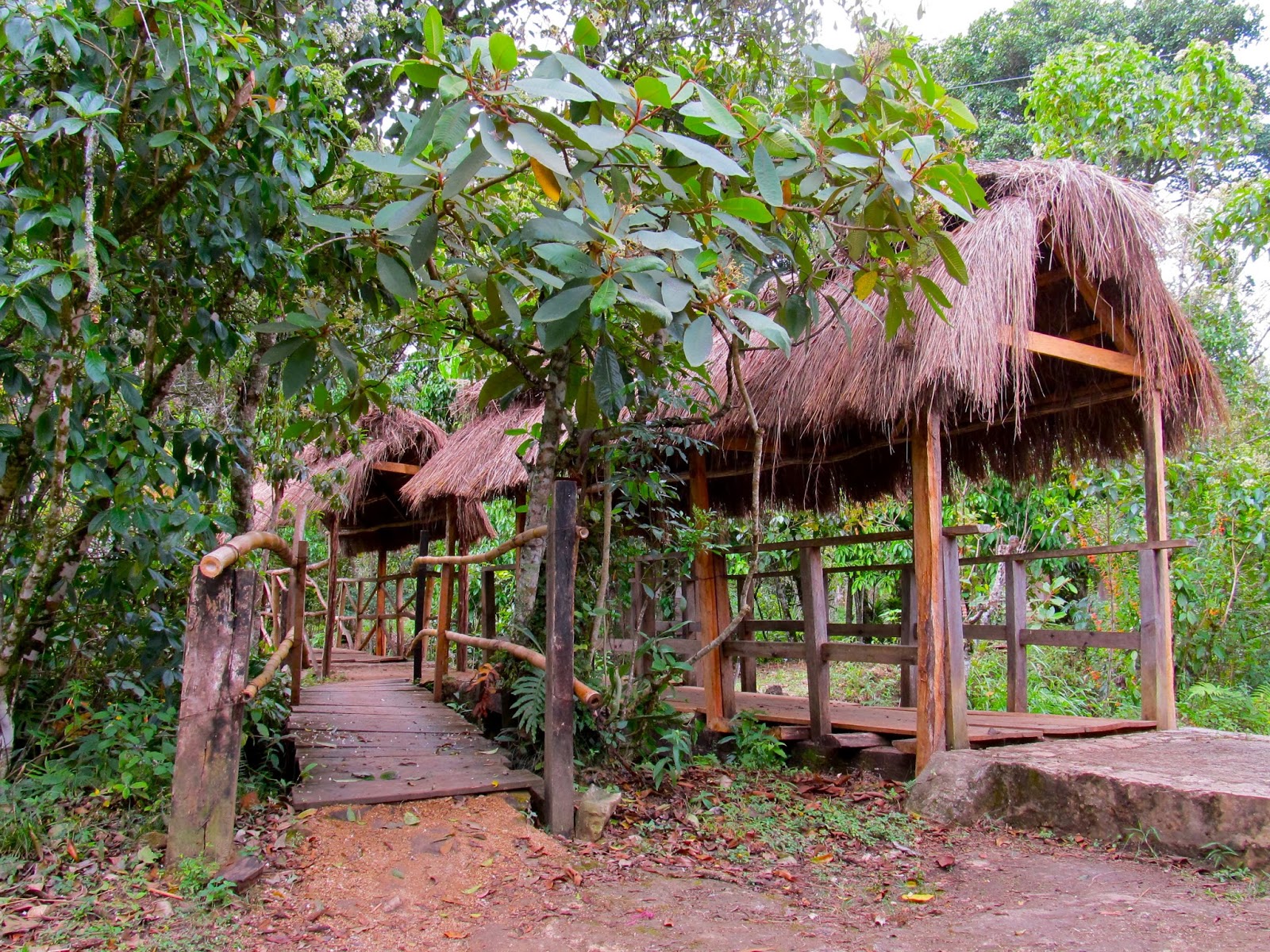 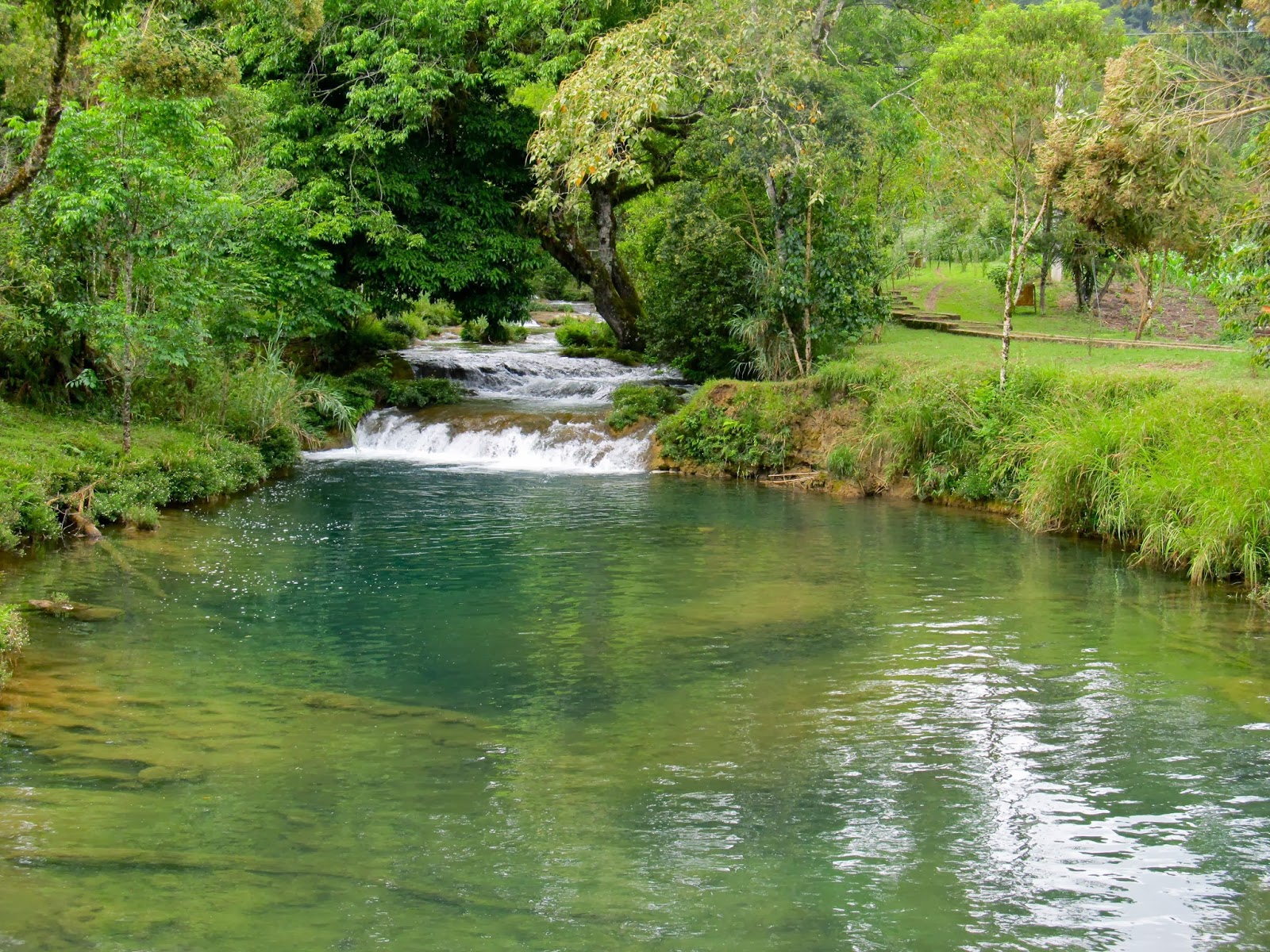 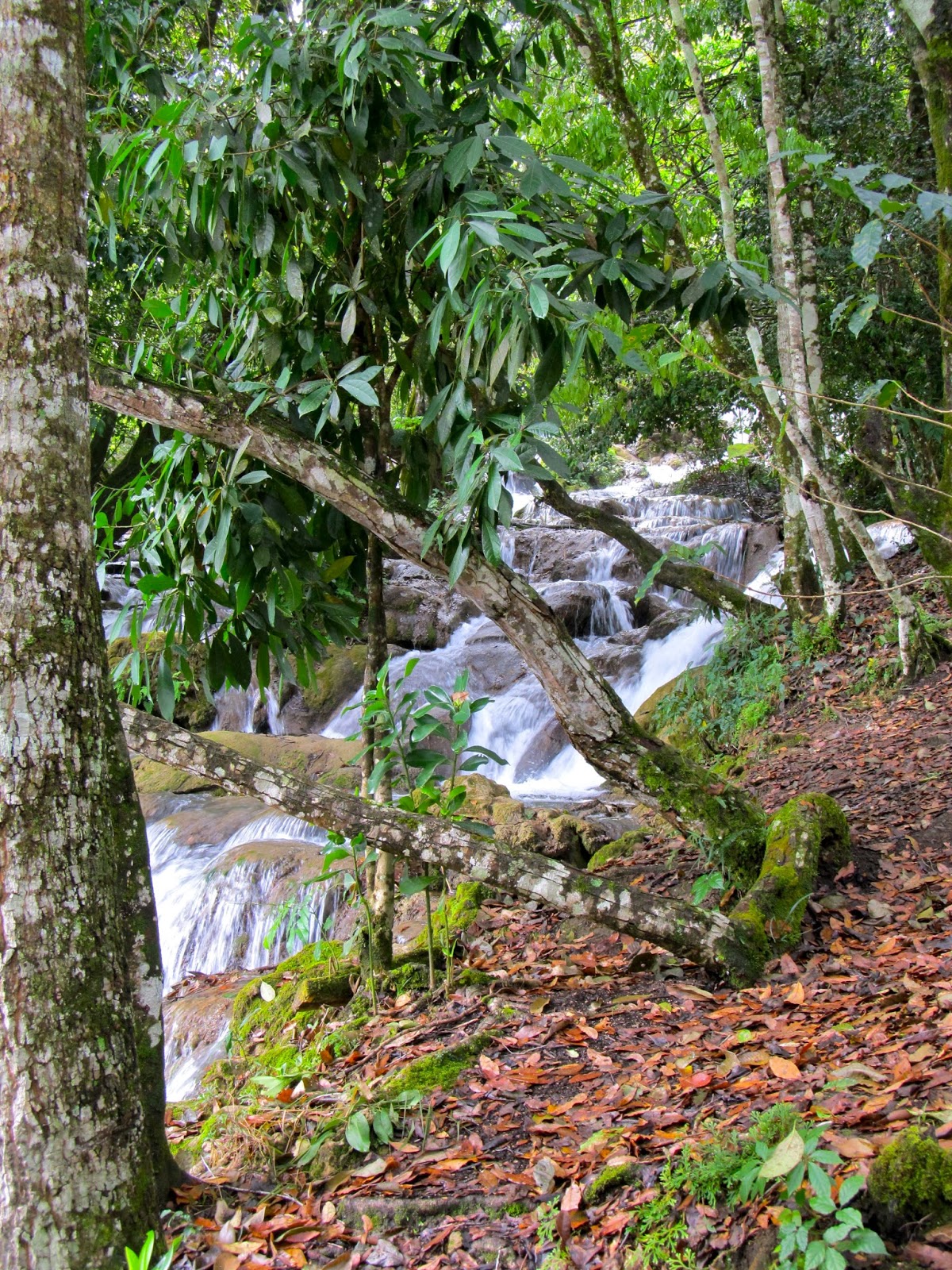 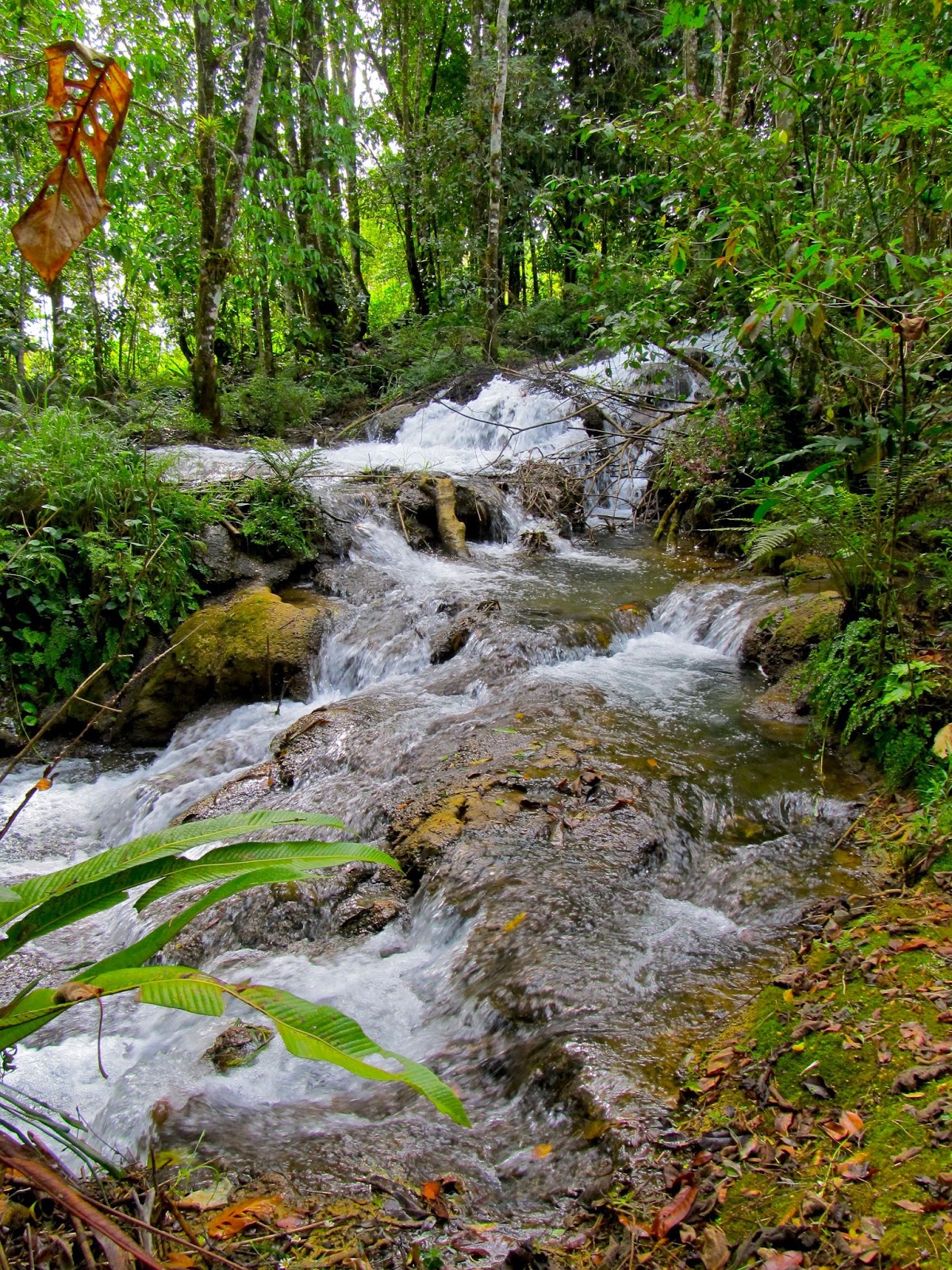 Posted by Sherry Hardage at 8:17 AM