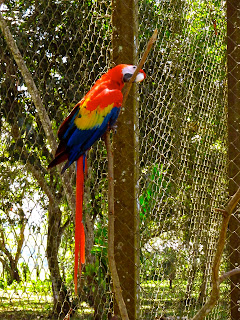 A Mexican ejido is a group of (usually) indigenous people living communally, sharing land, labor, equipment costs, etc, sort of like a large company but with democratic leadership. The ecocenter of Guacamayas is the project of the Reforma Agraria ejido, a group of Chinanteco people who migrated to southern Chiapas from Oaxaca in 1976.

For several years they tried various ways to make a living. They finally discovered the way to grow export quality chilies and they still do that today. But in 1996, using assistance from the federal government, they built a center of ecotourism. It is a conservation project to protect and encourage wild scarlet macaws, the Guacamayas.

The center is on the edge of the Lacantún River, on the southern side of the Lacandon jungle, a national park called Montes Azules. Opposite the center the jungle is dense and dark. A contrast to the "people" side where much of the undergrowth has been removed to make room for farms.

The center consists of a reception building, a restaurant, and about 30 hotel rooms with private baths, each part of a cabaña with two to three rooms, covered by a tall palapa roof. The ceiling of each room and all windows are covered with insect screen, but the space above is open under the organic roof. Any talk or noise is shared with the neighbors!

In addition there is an area for backpackers and tents, plus the "economico" shared housing, three beds to a room with bathrooms outside. The cost of the single bed is about a quarter of the hotel room. Traveling solo can get expensive, so I opted for the shared room. However, there were only two other couples in the entire place so I had the room and bath-building all to myself. Not a bad deal at all, and my little cabin had a river view, something you pay extra for if you get the hotel room!

One of the other couples was touring with a private guide. They had reserved a boat tour for the next morning and asked if I would be interested in sharing the cost. We pulled away from the dock at 7am in the cool of a slightly overcast morning.

Directly across the river, the ejido had installed a couple of nesting boxes for the Guacamayas and a pair have taken up residence. We got to see both birds in flight as well as many other species as the tour went on: Toucans, parrots, fishing eagles and a Cojolite, which a search of the Internet revealed is a crested guan, just as endangered as the macaws.

We turned up a tributary of the Lacantún River, shallow and of a different color. The Lacantún is the color of Chiapan jade; the tributary was teal. Such a beautiful scene as we rode up the mirror surface, surrounded by emerald jungle topped with blue sky and white clouds. Nature's palette skewed to the indigo side.

The boat pilot was fantastic. In the narrow and rather shallow tributary with many fallen trees and hidden rocks, he managed to zip through barely visible spaces. Far upstream we came up against a short water fall. A line of rocks about a foot high with water pouring over. There was one small gap with water gushing out. The guide mentioned something about the tour being over, so I expected us to turn around. The next thing I knew, the boat was roaring towards that tiny break in the wall, the front of the boat rose up and slammed back down. In an instant, we were up and over the falls. In retrospect, the guide must had said, “If we don’t make it through the crack, this tour will be over!”

After the tour, and breakfast in the palapa-covered restaurant, I wandered around the tiny village. Houses were wood or concrete block with stucco, roofed with fronds (the palapa roof) or corrugated metal (hot and noisy!!). They were simple one or two room buildings with an outhouse a few feet away. Some appeared to have indoor plumbing, and wires were strung all over indicating ample electricity and maybe phones. Each house had a decent plot of land, used for chickens, gardens, animals, banana plants, and coconut palms.

The only businesses appeared to be activities of the ejido: a greenhouse, a mechanic shop, the ejido meetinghouse, and an outdoor clothing store. The food store was a tiny lean-to against a house where an elderly woman sold junk food along with staples like cereal and shampoo. Her TV roared in the background.

The tourism center had a large flight cage with four macaws. Other fenced-in areas were populated with native Mexican deer. I'd never seen any and thought them to be relegated to zoos, but they do live in the Lacandon Bioreserva across the river where their main predator is the jaguar. They're small, about the size of a large goat with long slender legs. In the village there was a bigger flight cage with more scarlet macaws, some were nesting pairs. Their nesting box overlowed with straw and feathers.

After the tour of the town it was time for a swim. Beneath the short cliff near the restaurant, there was a rocky beach. People had been diving off the boat dock, but I thought it would be better, swimming alone, to be near the shore. One of the meseros assured me that the crocodiles were upstream and downstream, but not over there where I wanted to swim.

Hundreds of black tadpoles wiggled in the solar heated water between the rocks. I had to swish my sandals to keep from killing dozens at a time while wading into the river. The water was quite cool. The current between a rocky outcrop and the shore had created a fairly deep channel with water just strong enough to swim in and not actually go anywhere. A true swimming "hole".

Neck deep in the water, I watched a foot-tall gray heron fishing in the shallows. It walked slowly among the rocks pecking up small black round shapes with tails. So much for my attempts at tadpole conservation!

Posted by Sherry Hardage at 5:42 AM