8:30pm
After the lovely day in El Fuerte and a long bus ride, we finally got in line at the Ferry station in Topolobampo and waited for a couple of hours before they let us onto the boat. There were guys with uniforms and assault weapons, sniffing dogs, inspectors, and an icy breeze as the line moved along outside that went right through fleece jackets and sandals. It seemed like there were a thousand people boarding that ferry, and while we waited we watched dozens of semi-tractor trailers hauled aboard and rapidly stuffed into the bowels of the ship. I've never been on an ocean-going vessel and truly had no idea how big they are.

The tour company arranged for us to have cabins. They were very nice, with double bunks along each wall and a small bathroom. The closet was mostly full of the four life jackets we might have needed, but fortunately didn't. For people without cabins, and there were way more of them than us, it was a sleep wherever you can - find a place to stretch out - deal. Obviously, many had done this before and came equipped with blankets, pillows, and stuffed animals for the kids. We saw them hunkering down under the stairs, behind chairs in the lounges, stretched out on bench seats, even under tables in the cafeteria once it had shut down.

Dinner was included in the ticket price. By the time we got on board and in the cabins it was 11:30 at night. Some of us had a little dinner. Exhausted we crawled into our comfy beds and slept the night away as we slowly swayed across the Sea of Cortez. The wake up call was sudden and urgent. The staff members ushered people out the door faster than most could wake up. I don't know what the hurry was except they wanted to clean the cabins. We ended up standing in line for quite some time before being allowed off the boat, and then in more lines as dogs sniffed our luggage and then a customs search. Did the authorities think we might have picked up weapons or drugs out there in the ocean?

The new guides were waiting patiently. The boat was late by an hour or more, so the whole schedule for the day was postponed slightly. We piled into vans and were taken to the hotel in La Paz where most of our stuff would remain behind. We took only what was needed for three days at a beach camp. It took 2 1/2 hours  to trek across the peninsula of Baja Sur, the lower of the two Baja states. Such dry desert. The kind of dry that is prevalent in Arizona, with forests of saguaro cacti. The prominent cactus here is a relative of the saguaro, but not as tall or majestic, and with many more 'arms'.

There were a few citrus orchards near the coast but the further inland we went, the dryer and less populated. It's a mystery how cities the size of La Paz, Ciudad Constitucion, and Puerto San Carlos can exist when the only source of water seems to be the salty ocean.

Our beach camp was on a spit of sand that connects the island of Magdalena with the peninsula. We could see the sparkling lights of Puerto Magdalena at night. A hike over the hill of sand revealed the vast Pacific Ocean,  rolling its huge waves inland, building yet more sand bar. In the dead of night, without a moon, the stars shown so brightly it was easy to see everything in camp, even inside the tents. The lights of Puerto Magdalena turned off after midnight making the sky inky black. The stars looked like pinholes in a dark blanket.

There were eight cabin tents set up in two rows, each outfitted with one or two cots, a table, and a battery powered lamp. The cots were quite comfortable since each was also covered with an inflatable camping mattress and a sheet. The sleeping bags left something to be desired, as they were slick and tended to slide off in the night. Next to the tents were two large "army" tents for cooking and eating. Six men attended the twelve of us. Two boatmen, two guides and two cooks. They were all exceptionally good at their jobs. We never lacked for coffee or delicious meals. The guides were both excellent kayakers and we explored the nearby mangrove forests and estuaries where we saw dozens of bird species, and fish and turtles in the water.

The weather couldn't have been better. A gentle humid breeze blew off the Pacific most of the time. The days were quite warm, the water cool but fine for wading, and the nights were a bit chilly but not uncomfortable. In the late afternoon, the wind tended to pick up and the waves got choppy, so the best time for whale watching was usually in the mornings.

Everyday, for three days, we went out on the boats to see the whale moms with their babies, or matings. Baleen whales mate in threes. It takes two males, one to keep the female pushed upwards and one to mate with her. Afterwards, the male roles are reversed and the second male takes his turn. We saw several matings, which were rather slow and placid from the surface....a lot of rolling around with flippers lifted languidly into the air with an occasional puffing breath.

The mothers and babies seem to swim around rather aimlessly unless the mother is directing her offspring away from the boats. Adults don't eat while in the south, they live off their reserves of fat. The babies, on the other hand, drink gallons of fat-rich milk daily and double in size before heading north with their mothers. Babies are born every other year. A nursing mother doesn't mate until the year after the baby is born, and gestation takes a whole year!

Occasionally a mother will encourage her baby to approach the boats. Some of our group got to pet a baby on the second day, and then all of us were able to pet one during the last couple of hours of the trip, right before we had to head back to Puerto San Carlos! 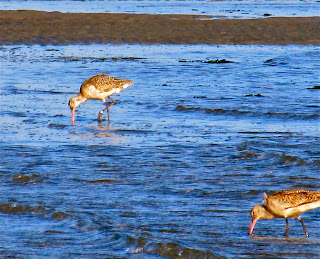 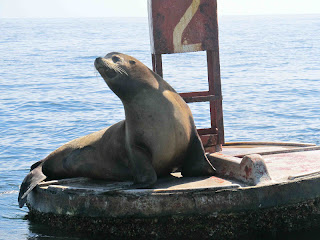 Posted by Sherry Hardage at 9:57 PM