I do believe that Tonina is my favorite of the Mayan ruins. It is in a temperate zone, not too wet, not steamy like Palenque. It's the highest pyramid in all Mexico, but that is a result of topography. The people of that area used an existing mountain, one that gradually rose up from the valley floor as the base for their 'pyramid'. Nevertheless, it is spectacular and overlooks a beautiful verdant valley with many "ranchitos", large farms that raise chickens, ducks, geese, and cattle. The cheese from this area is famous, and not surprising, judging from the many cows we saw. About half the cattle looked like the Brahmins from India.

This was my second visit to Tonina, I had been last April. (See blog 4/6/11 Tonina ) This time, the weather was cooler, the museum was open (it wasn't a Monday!), and we took a Combi instead of one of the big luxury buses. It's hard to say really, which is preferable. The Combis are cheaper, but the bus is more comfortable. I got motion sickness both times, so I'm not sure which one is better from a nausea perspective.

Since the day was pleasant we opted to walk from the bus station along the main highway into the center of town. The plaza there was the scene of a rather horrible multi-day battle during the Zapatista uprising in 1994, in which the Zapatistas suffered heavy casualties. We looked around but found no commemoration of the event. The federal government won that round, so like Tiananmen Square, they can acknowledge what happened - or ignore it, and hope it gets forgotten.

At the archeological site, the museum was not only open but the entire site was now completely free. This was different from last spring and I asked several times why. "New Policy" I was told, but no reason for the new policy. That seemed awfully strange. The museum is well kept, the bathrooms are clean, there were two guards, one in each salon, and I know there is ongoing archeological work. How could it be completely free?

At the spot in the trail where the highest observatories of the ancient Mayans come into view, there was a new large black sign with red lettering declaring the land to be under EZLN rule (the Zapatistas). Off to the south, an enormous Mexican flag fluttered and spread itself out in the breezes. It flies above the newly enlarged federal military installation, which was situated there after the 1994 rebellion.


At other federally controlled eco-parks, like Agua Azul, and Misol Ha, there have been ongoing conflicts between soldiers and the EZLN. In fact, at those two sites, we had to pay twice, not much, but once to the EZLN and another entrance fee to the park. I wondered if the now free Tonina site had something to do with the EZLN controlling the property around the ruins. Who knows? Nobody seemed to want to answer the question.


I had been so disappointed that the museum was closed during my last trip. This time it was open, and well worth a long look. It contained many models, bas-relief sculptures, copies of pages from the ancient Dresden Codex, and a number of decapitated statues of captured prisoners. It was unknown whether the statues were beheaded in lieu of the actual person, or beheaded along with the person, or perhaps, like many ancient sculptures, the heads simply fell off, weakened by time. It's even possible the sculptures were created headless in the first place. 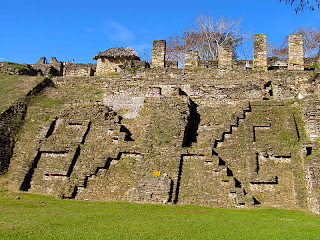 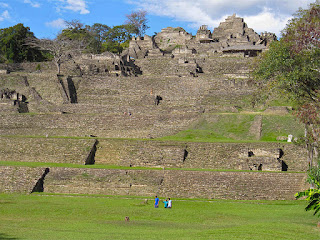 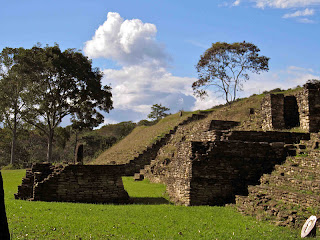 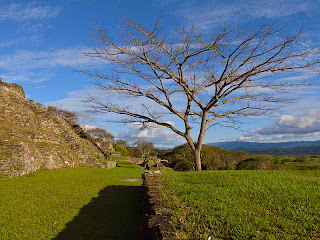 Arnulf and I spent far too much time inside the museum. There wasn't enough day left to climb to the very top of the pyramid, though I think he would have wanted to do that. A guard gently kicked us out and followed us down the many steep steps till we were back on the trail. We stopped for a drink and a little snack at the tienda near the bottom of the hill, then waited at the entrance for a Combi. After half an hour I asked the guard when he thought one might come and he pointed off into the distance, saying we'd need to walk up to the highway to catch a Combi. So off we went, hiking up the hill and across the countryside to find the highway almost deserted, the sun long set. Somehow I'd lost my bearings and we tramped off down the road away from Ocosingo. When a Combi finally passed us, we had to yell for it to stop. Everyone on board had a good laugh when the driver told us he'd be glad to take us to Ocosingo, but it was in the other direction, and we'd have to go all the way to the very end of his route before heading back towards the city. Fine with us, at least we weren't on foot anymore. What an adventure we had! It took almost an hour as we drove down a worsening road until it was thoroughly rutted and the Combi crept along humping up over one gouge at a time. The area was peppered with large and small farms, pleasant homes, barns and many open fields of grassland with cattle. By the time we'd dropped off every passenger, and gotten back onto a paved road it was quite dark.

Finally got back to San Cristobal and home by10:30. John and Mike were thrilled to see me. They'd locked themselves out of the bedroom section of the house and were about ready to hunt up a hotel room if I didn't come home soon. It's so nice to be needed......

Posted by Sherry Hardage at 3:57 PM